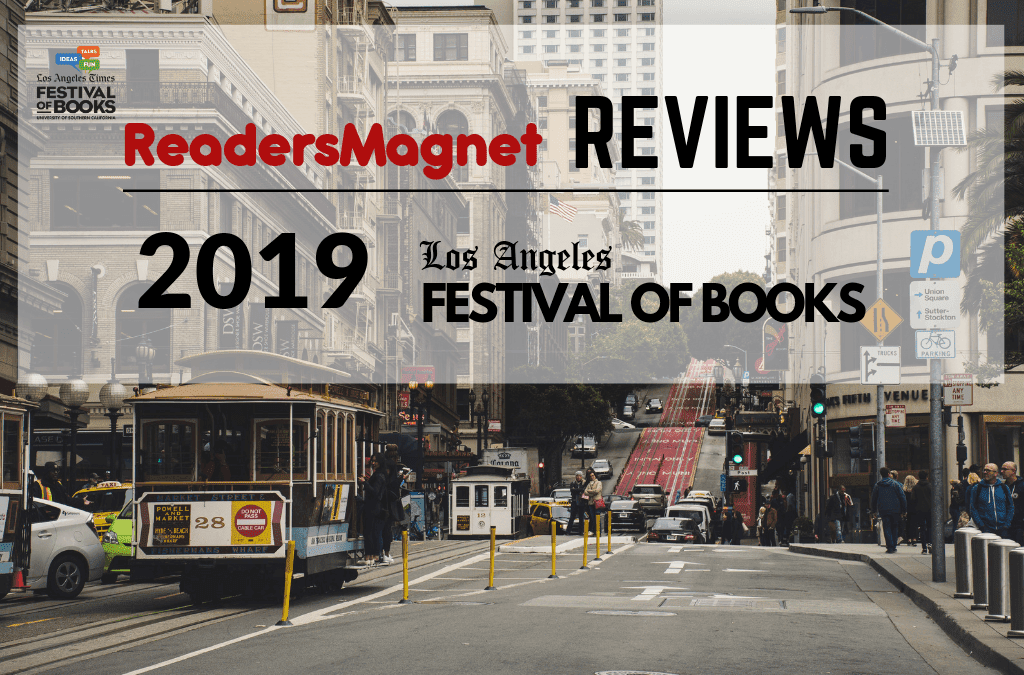 ReadersMagnet review its successful stint as on one of the exhibitors in the recently concluded 2019 Los Angeles Festival of Books.

Last weekend, ReadersMagnet self-publishing company added yet another milestone in their book fair content distribution campaign by successfully representing its authors in the 2019 LA Times Festival of Books. With over 160 authors who signed for the event, ReadersMagnet certainly made waves during the two-day event. This is ReadersMagnet’s first time to participate in the largest book fair in the country.

“ReadersMagnet, that’s where we are. This team here is efficient, they’re professional, they look great. In fact, they look better than any other publishing company out here.” – Pastor Tommy Seay Sr., author of The Enigma of the Holy Trinity

ReadersMagnet shares the success of the 24th Los Angeles Times Festival of Books.

Day One started early for the ReadersMagnet staff stationed at Booth 201. With over 160 titles, the team set up three book shelves with one in each side and one main shelf at the center. Aside from opening the two-day book display, ReadersMagnet also went ahead with the scheduled book signing event.

First to arrive were authors Allan Hall (The Naked Queen: A Tangential Arthurian Legend), Louise Andrea Dube (Robika the Adventurous Hungarian), Walter Madenford (Going Against the Tide – Prophetically) and his wife. Authors Diane Davies (Jeannie Ann’s Grandma Has Breast Cancer), Ingrin Kern (Triumph), Dana Hayne (GPS for the Soul: Wisdom of the Master), Rose B (The Gift of Sobriety), and Lyda Greico (Because It’s Wrong: Bullies vs. Nazis) also showed up later in the day.

Author and Pastor Tommy Seay Sr. helped draw more crowd towards the booth with his energy and very engaging nature. Like Seay, a number of authors not scheduled for the book signing also showed up. Overall, Day One turned out to be a fun start with all the interactions with fellow authors and booth visitors.

Day Two went from fine to great as more visitors found their way into ReadersMagnet booth. This time,  most of our visitor are children and students accompanied by their parents.

Dr. Byron Conner (The Face of Hunger) came to the both along with his wife. Children’s book author Gabriella Eva Nagy had a wonderful time with her book fans who lined up for the book signing.

Author and war veteran Robert D. Easton (Sailing Around the World in 300 Days) completed the line-up for the second day of the book signing event.

What made weekend book fair special was the camaraderie that ReadersMagnet authors shared towards each other during the duration of the festival. It filled the booth not only with laughter but also with stories and inspirations, both from visitors and authors.

There was even a moment when Mr. Conner and his wife patiently listened to one of the visitors as he discussed his views about poverty and his own plans to write a book. Before saying goodbye, the good author wished him luck with his aspirations.

Like last year’s Miami Book Fair International, ReadersMagnet certainly drew many visitors at the LA Times Festival of Books. In fact, Booth 201 is one of the liveliest tents along Trousdale Parkway.

It is official, ReadersMagnet’s participation to the 2019 Los Angeles Times Festival of Books is a success and one for the books. Join ReadersMagnet in their future book fair events and share your story with the world. Contact ReadersMagnet at their office number: (619) 354 2643 Toll Free Number: (800) 805 0762 Fax Number: (661) 338 1442 or email them at info@beta.readersmagnet.com for more details.