Reoccurring Pandemic Every 100 Years: A Myth or A Fact? 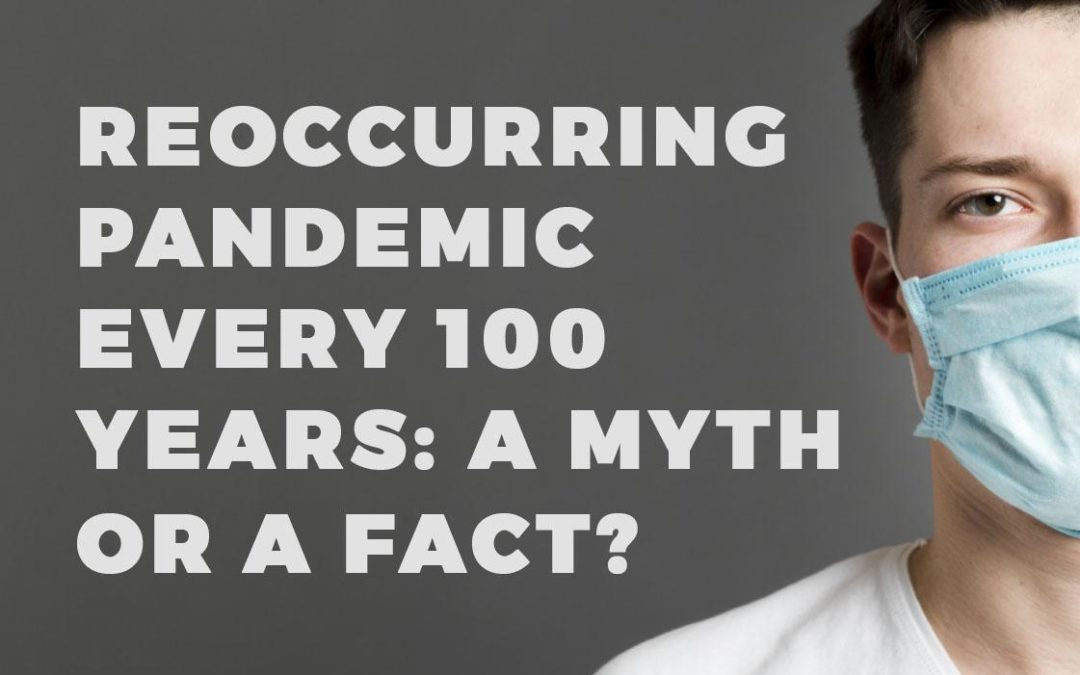 Increasing death toll, total lockdowns, community quarantines, ongoing Covid19 cases, and economic downfalls — these are just some of the significant things that the world is currently facing. There are just too much noise and chaos that have been emerging in every country coming from people that want to be heard, express their fear, teach others not to panic, and other concerns from fearful residents. Pandemics do not happen frequently but when they do, they make most out if. There’s no bloodbath, only death that is caused by microorganisms.

Various countries, such as London, Spain, China, Italy, Russia, North America, etc., have been badly beaten by these diseases that occurred ranging from 165 AD up until today. Unlike wars where you know who your enemies are and can see them, pandemics caused by viruses and bacteria are more devastating because it is like fighting and fearing the unknown and invisible. Nobody can see it by using their own eyes. What everyone knows is that these foreign bodies are dangerous and lethal.

Black Death, Plague of Justinian, Japanese Small Pox Epidemic, Hong Kong Flu, and Italian Plague are some examples of the pandemics that happened in history. These diseases have wiped out millions of people from different parts of the world. Regardless of the highness and lowness of the death rate of each virus or bacterium, the big chance and high risk of transmission cause fear from people. Most of the pandemics that are being recorded in the history have no cure while others already have or are still developing vaccines for cure.

The new strain of the coronavirus, Covid-19, is the current source of fear, panic, and death from all across the world. There is still no existing treatment or remedy for this disease as of the moment. There are a lot of speculations that Covid19 came from bats, is man-made, or a natural occurrence every century. These theories have been circulating online and people from different platforms have stumbled upon these conspiracies.

However, there have been no strong evidences that the novel coronavirus is created by humans nor acquired from consuming bats. The third speculation, on the other hand, is the one that we are trying to solve. So, the million-dollar question is, “the novel coronavirus innately occurs every 100 years, true or not?” Let us read a summary from the deadly pandemics that happened how many centuries ago so that we can compare and contrast these events to the current crisis that the world is experiencing, as well to give a solid answer to the question raised above.

It is last plague of the infamous and devastating bubonic plagues that happened in Europe in the 17th century. The disease came in Marseille, France in the year 1720 and have killed 50,000 people that resides in the city while another 50,000 in the north of the region and other encompassing towns. Thus, the total deaths due to this pandemic is 100,000. The cause of this plague was believed to be the Yersinia pestis bacteria that arrived at Marseille’s port carried by the Grand-Saint-Antoine merchant ship in the same year of the reported outbreak. There were tight sanitation regulations and quarantine procedures imposed in order to prevent the spread of the disease. Thus, it did not take long for Marseille to recover.

There is a total of 7 cholera pandemic that were recorded in the history of the world and the Asiatic cholera is the very first cholera crisis that occurred. It took place near Calcutta, British India, and was transmitted all across the Middle East, east of Africa, coast of Mediterranean, and Southeast Asia. There were over a million people that were killed, including Indians and British soldiers, due to this disease that was brought by the V. cholera bacteria. It also had gotten into the Caspian Sea before it pulled back. However, there were various cholera pandemics that happened after this outbreak.

Spanish flu is one of the most remarkable pandemic in the history. This disease includes the H1N1 and swine flu viruses. It is also called as the influenza pandemic of 1918, which infected a total of 500 million persons all over the globe. Having infected approximately 27% of the population of the world, the total estimated death ranges from 17-50 million. Thus, this is one of the biggest threat to humans and among the deadliest pandemics the world has experienced. The only factor that leaves people wondering is that this virus attacked those healthy and young adults ages 20-40 years old instead of the known influenza that is usually deadly for babies, as well as elderly people with ages more than 70 years old.

The novel coronavirus is a new strain of virus that has been discovered in late 2019. People from the medical field have not yet identified what is the cause of this virus and how it came into existence. The only thing that everyone knows is that the novel coronavirus, also known as COVID-19, originated from Wuhan, China and it is similar to SARS. From China, it has already spread all over the world affecting both its neighboring and distant countries, such as Italy, South Korea, Japan, Spain, France, New Zealand, Philippines, Germany, and more. There have been plenty of reported deaths and cases due to this disease. The cure for COVID-19 is still not found; however, there are already testing kits that were developed to check if a person is infected or not. Governments of different countries have already declared lockdown, quarantine, and any other precautionary measures to contain this disease. This case is still ongoing and continuing to threaten the health of the people.

Based on the given information, there is no solid grounds that prove that there is a re-occurrence of pandemic every century. These unfortunate events are not scheduled and nobody knows when and where these dangerous and, worse, deadly bacteria and viruses will attack. Thus, there is no such thing as reoccurring crisis every 100 years.