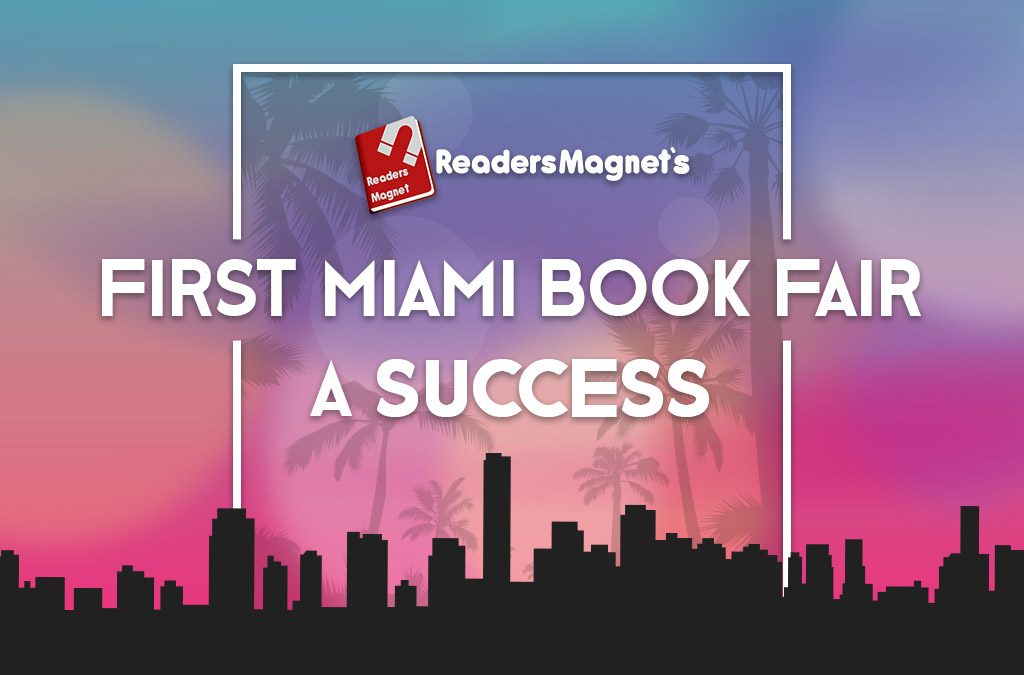 Somewhere along Section E, fair goers cannot help but stop over two brightly-colored booths filled with shelved books and tables littered with beautiful posters, brochures, bookmarks, postcards, loot bags and other freebies. Booth 336-338 looked like the busiest in all of downtown Miami with kids, students, buyers and tourists filling in the booth during the weekend street fair and book signing event. It’s now official – ReadersMagnet’s first Miami Book Fair International is a success!

ReadersMagnet set up two booths along Section E featuring over a hundred titles and authors. With both pavilions filled with beautifully designed books and tables set up for the book signing event, it didn’t take long for visitors to storm the shelves and from time to time a gathering around the author’s table.

Day One started a bit gloomy. The first author to visit the ReaderMagnet booths was KG Follet (The Bear’s Den series) who gamely posed for pictures. Author Alexandra Besitka (Titanabet) charmed young booklovers and for a moment found herself surrounded by students eager to have their copies signed. She later posed for a group photo with them. The day ended with Ralph Mosgrove (Saying Thanks and Beyond: Is Saying Thank You Enough?) gracing the booth with his presence.

Posted by ReadersMagnet on Friday, November 16, 2018

Posted by ReadersMagnet on Friday, November 16, 2018

The second day started with our ever-energetic author Dr. Josefina Monasterio visiting our booth. The 71-year old body builder and fitness guru gamely signed copies of her book, Vibrant At Any Age. Authors Rose B., Clarence Vold, Dana Hayne, and Assad Wright joined the book signing event and made our Saturday quite meaningful. Book fans and booklovers visited our booths, with most of them in groups.

The ever vibrant Dr. Josefina Monasterio interacting with interested bookworms at the Miami Street Fair Book Signing.You can purchase her book at https://www.drjosefina.com/#VibrantAtAnyAge #JosefinaMonasterio #MiamiBookFair2018 #ReadersMagnet

Posted by ReadersMagnet on Saturday, November 17, 2018

Posted by ReadersMagnet on Wednesday, November 21, 2018

Farmer's Son, Military Career author Clarence Vold gives a thumbs up during his two-day visit in the recently concluded…

Posted by ReadersMagnet on Wednesday, November 21, 2018

Sunday continued to be spectacular as visitors continued to troop in for the last day of our book signing event. Clarence Vold, author of Farmer’s Son, Military Career heartily signed copies of his book while interacting with book fans despite his arm injury that required him to wear an arm sling. It’s such a warm feeling seeing our authors chatting with our booth visitors. The scene is an epitome of commitment- something that ReadersMagnet shares with its authors.

With the two booths filled with over a 130 titles from more than 100 authors, ReadersMagnet certainly made waves in its first ever Miami Street Fair appearance and book fair content distribution. Its friendly staff along with its roster of accommodating authors made a remarkable impression not only to the visiting crowd but also to fellow exhibitors along Section E. True to its motto of ‘sharing your story with the world’, ReadersMagnet Self-Publishing successfully represented its author and their brand in one of the most important literary events in the United States- the 2018 Miami Book Fair International.

With this success, rest assured that ReadersMagnet will come back next year with more authors, more titles, and more stories to share.