Tracking the Coronavirus: A Timeline of How COVID-19 Turned into a Pandemic 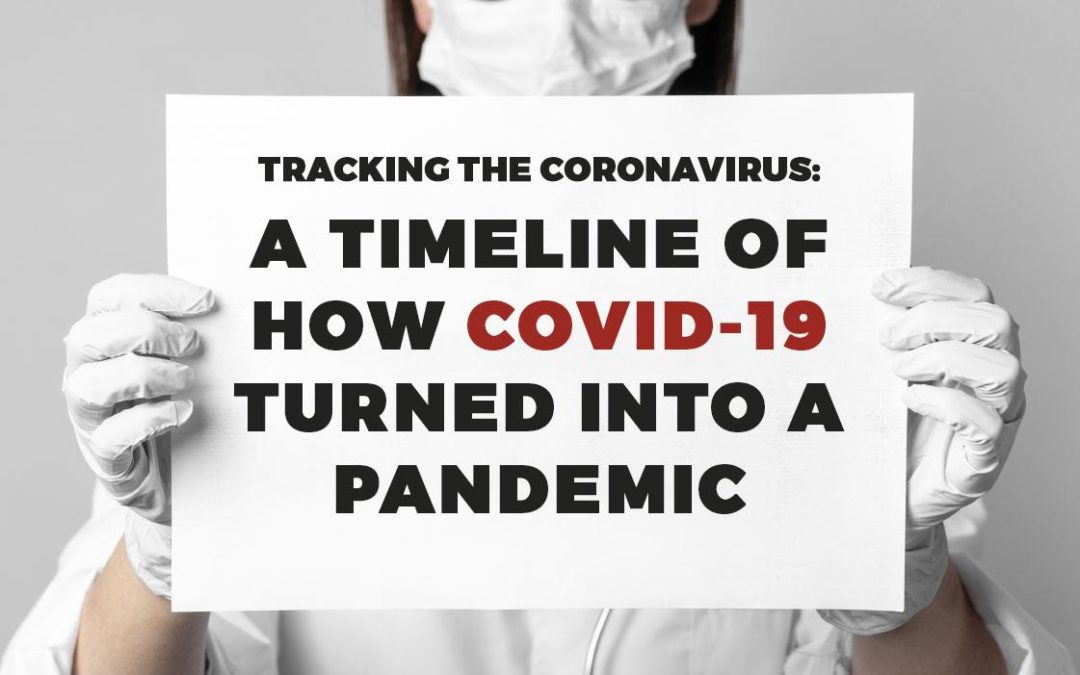 The new coronavirus (COVID-19) is spreading fast. It has already infected more than 211,800 people from different countries and killed over 8,700 since December 2019. Although most people recover from COVID-19, its rapid spread is creating hysteria around the world. There is currently no specific treatment for the disease. Patients depend mostly on their immune systems to combat the deadly virus. From China (origin country of COVID-19), the new coronavirus has already spread to more than 150 countries. By March 2020, the World Health Organization (WHO) declared the coronavirus outbreak a pandemic.

To learn more about how this novel coronavirus turned into a pandemic in a span of three months, here is a timeline of the critical moments of COVID-19:

In December 2019, a series of pneumonia cases of unknown cause emerged in the city of Wuhan in the province of Hubei, China. Examinations of the patients would later find out that the disease is caused by a new strain of coronavirus – a type of virus that can be deadly to mammals and birds and can be passed on to humans.

Initial reports from Chinese health authorities linked the origin of the disease to the Huanan Seafood market in Wuhan where wild animals such as bats, birds, marmots, rabbits, and snakes were traded illegally. On 1 January 2020, the entire market was closed and disinfected.

However, most recent data have shown that the earliest patient of COVID-19, who was infected in November but became ill on 1 December, had no actual link to the wet market. In addition, 13 of the first 41 cases of the disease also had no link to the marketplace, hence convincing experts to consider that the virus might have spread silently between people in Wuhan before the series of cases from the Huanan Seafood Market was discovered in late December.

On 7 January 2020, the virus causing unknown pneumonia cases in China was officially identified as a new coronavirus. Its symptoms – fever, dry cough, shortness of breath, respiratory failure or pneumonia – were also determined. Four days later, the first known death from the disease was reported in Wuhan.

Because there was not much information about the severity of the emerging outbreak, governments were ill-equipped to preventing and combatting it. In just a matter of days, the new coronavirus spread quite rapidly both inside and outside China.

On 20 January, the first confirmed cases outside China in Japan, South Korea, and Thailand were reported by WHO. On the following day, the United States also announced its first confirmed case in Washington. By the end of January, WHO declared the outbreak of the new coronavirus a global public health emergency, as more than 9,000 cases from around 18 countries had been reported.

In February 2020, the number of deaths from COVID-19 exceeded the number of deaths reported from the SARS outbreak in 2003. In mainland China, death toll rose to at least 811 in just barely two months. The spread of COVID-19 around the world became unprecedented in February. An increasing number of countries in Asia, Africa, Australia, America and Europe had been reporting confirmed cases of the disease almost regularly.

Among the worst-hit countries were Italy and Iran. On 24 February, health officials in Italy announced a total of six deaths from COVID-19, the most number of deaths from the disease in Europe so far. Iran, on the other hand, reported 34 deaths out of 388 confirmed coronavirus cases on 28 February. In the United States, the number of confirmed cases was also increasing quite fast that by the end of the month, U.S. President Donald Trump announced travel restrictions to Iran, Italy, and South Korea. This is in addition to the restrictions to China imposed earlier.

In March 2020, the number of coronavirus cases around the world already reached more than 100,000. Book events, music festivals, sports games, and any other public gatherings were cancelled in numerous countries affected by the outbreak.

In the United States, Donald Trump signed an $8.3 billion emergency spending package to combat the outbreak, as the number of confirmed cases in the country exceeded 500 during the first week of March. In Italy, more than 5,800 people were already infected and more than 230 died from the virus. As a result, the Italian government issued a lockdown to quarantine around 16 million people in its northern Lombardy region on 8 March. In Iran, a total number of 8,042 cases with 291 deaths was reported around the same time.

On 11 March, the severity and spread of COVID-19 became quite alarming that WHO already characterized the outbreak as a pandemic – an outbreak declared when a new disease for which people do not have immunity spreads globally beyond expectations. Two days later, WHO announced that Europe became the new epicenter of the pandemic outside China, as the continent reported more cases and deaths than the rest of the world combined. On 17 March, the European Union (EU) issued a 30-day ban on most non-essential incoming travel.

Health experts and scientists from around the world are now exerting much effort on finding a vaccine against the rapidly spreading COVID-19. In the United States, researchers already administered the first shot of an experimental vaccine to the first person in a test. However, even if the trials succeed, health officials cautioned that the vaccine would still not be widely available for at least 12 to 18 months. With this, it is imperative for everyone to remain calm but cautious and cooperative in combatting this new coronavirus.